The fatigue strength of seamless steel pipe materials is extremely sensitive to various external and internal factors. External factors include the shape and size of the parts, surface finish and conditions of use, etc., and internal factors include the composition of the material itself, organization state, purity, and residual stress. The subtle changes of these factors will cause fluctuations or even substantial changes in the fatigue properties of the material.

The influence of various factors on fatigue strength is an important aspect of fatigue research. This research will provide the basis for the reasonable structural design of parts, the correct selection of seamless steel pipe materials and the rational formulation of various cold and hot processing techniques to ensure that the parts have high Fatigue performance. 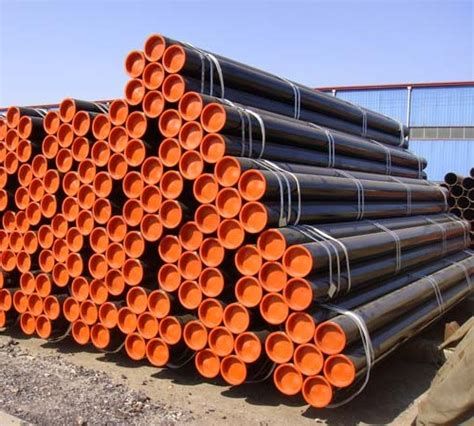 The effective stress concentration factor increases with the sharpness of the notch, but it is usually smaller than the theoretical stress concentration factor.
Fatigue notch sensitivity coefficient q: The fatigue notch sensitivity coefficient indicates the sensitivity of the material to fatigue notches, and is calculated by the following formula.
The data range of q is 0-1. The smaller the value of q, the less sensitive the seamless steel pipe material to the gap. Experiments show that q is not purely a material constant, it is still related to the gap size, only when the gap radius is greater than a certain value, the q value is basically independent of the gap, and for different materials or processing conditions, the radius value is also different.

2. The influence of size
Due to the inhomogeneity of the material itself and the existence of internal defects, the increase in size will increase the probability of material failure, thereby reducing the fatigue limit of the material. The existence of the size effect is an important problem in applying the fatigue data measured by the small sample in the laboratory to the actual size of the part. Because it is impossible to make the stress concentration and stress gradient on the actual size part completely similar to the small Reproduced on the sample, causing the disconnection between the laboratory results and the fatigue failure of certain specific parts.

3. The influence of surface processing
There are always uneven processing marks on the machined surface. These marks are equivalent to tiny gaps, which cause stress concentration on the surface of the material, thereby reducing the fatigue strength of the material. Tests have shown that for steel and aluminum alloys, rough machining can reduce the fatigue limit by 10%-20% or even more than longitudinal fine polishing. The higher the strength of the material, the more sensitive it is to surface finish.

In fact, under certain conditions, a small number of overloads will not cause damage to the material, but will also strengthen the material due to deformation strengthening, crack tip passivation and residual compressive stress, thereby increasing the fatigue limit of the material. Therefore, the concept of overload damage should be supplemented and revised. The so-called sub-load exercise refers to the phenomenon that the material fatigue limit rises after the material runs for a certain number of times under a stress level lower than the fatigue limit but higher than a certain limit.
The effect of sub-load exercise is related to the performance of the material itself. For materials with good plasticity, the exercise cycle is generally longer and the exercise stress is higher to be effective.

The influence of the microstructure on the fatigue properties of materials is not only related to the mechanical properties of various organizations themselves, but also to the grain size and the distribution characteristics of the structure in the composite structure. Refining the grains can improve the fatigue strength of the material.

6. The influence of inclusions
The inclusion itself or the hole created by it is equivalent to a tiny gap, which will produce stress concentration and strain concentration under the action of alternating load, which will become the source of fatigue fracture and have a negative impact on the fatigue performance of the material. The influence of inclusions on fatigue strength not only depends on the type, nature, shape, size, number and distribution of inclusions, but also depends on the strength level of the material and the level and state of applied stress.

The mechanical and physical properties of different types of inclusions are different, and the difference between the properties of the base metal is different, and the effect on the fatigue performance is also different. Generally speaking, easily deformable plastic inclusions (such as sulfides) have little effect on the fatigue performance of steel, while brittle inclusions (such as oxides, silicates, etc.) have greater harm.

The tightness of the combination of inclusions and base metal also affects the fatigue strength. Sulfides are easy to deform and bond closely with the base material, while oxides are easy to separate from the base material, causing stress concentration. It can be seen that from the type of inclusions, sulfides have less influence, while oxides, nitrides and silicates are more harmful.

The purity of the material is determined by the smelting process. Therefore, the use of purification smelting methods (such as vacuum smelting, vacuum degassing and electroslag remelting, etc.) can effectively reduce the impurity content in the steel and improve the fatigue performance of the material.

Surface heat treatments such as carburizing, nitriding, and carbonitriding can increase the wear resistance of the parts, and are also an effective means to improve the fatigue strength of the parts, especially to improve corrosion fatigue and biting corrosion.

The effect of surface chemical heat treatment on fatigue strength mainly depends on the loading method, the carbon and nitrogen concentration in the infiltration layer, the surface hardness and gradient, the ratio of surface hardness to core hardness, the depth of the layer, and the magnitude and magnitude of the residual compressive stress formed by the surface treatment. Factors such as distribution. A large number of tests have shown that as long as the notch is processed first and then subjected to chemical heat treatment, generally speaking, the sharper the notch, the more the increase in fatigue strength.

Contrary to chemical heat treatment such as carburizing, nitriding and carbonitriding, if the parts are decarburized during the heat treatment process, the strength of the surface layer is reduced, and the fatigue strength of the seamless steel pipe material of Permanent Steel Manufacturing Co.,Ltd will be greatly increased. reduce. Similarly, surface coatings (such as Cr, Ni, etc.) due to the notch effect caused by cracks in the coating, residual tensile stress caused by the coating in the base seamless steel pipe, and hydrogen embrittlement caused by the infiltration of hydrogen during the electroplating process, make fatigue The intensity is reduced.

Induction hardening, surface flame hardening and thin-shell hardening of low hardenability steel can obtain a certain depth of surface hardness layer and form favorable residual compressive stress on the surface, which is also an effective method to improve the fatigue strength of parts.

Surface rolling and shot peening treatments can form a certain depth of deformation hardening layer on the surface of the sample, and at the same time generate residual compressive stress on the surface, which is also an effective way to improve the fatigue strength.

Tips: ASTM A53 covers seamless and welded steel pipe with nominal wall thickness. The surface condition is usually black and hot-dipped galvanized. ASTM A53 is produced mainly for pressure and mechanical applications, and is also used for transport of steam, water, gas line pipes.